Pinewood Christian Academy in Middleburg, FL has been producing students that go on to high school in high level/honors programs like AICE (Cambridge), IB (International Baccalaureate) and AP programs for the last 18 years. They brought Flightless on board to create a new logo that would exude confidence, steadiness, and reliability.

Working with Stephanie was a joy from start to finish. She took time to walk us through not only the design process, but helped us first pinpoint our overall goals. She did an excellent job of listening to our needs. 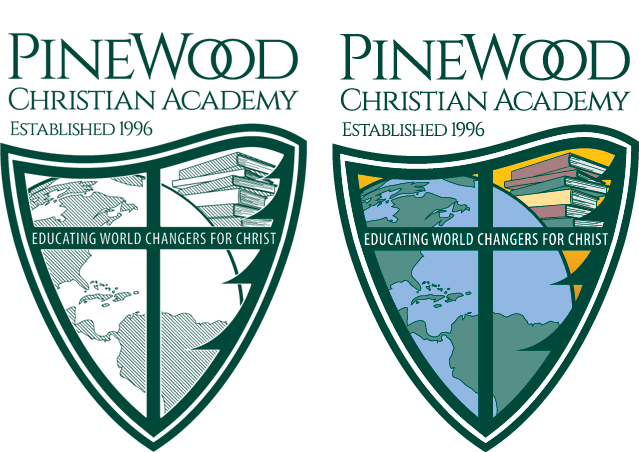 The original logo for Pinewood Christian Academy was a poor assembly of clip-art pieces, and did not instill trust in the parents of prospective applicants. The new logo needed to have a classic, academic look; but the committee didn’t really know what direction to go in. Flightless started by developing two “sketches”. One was a rough rendition of an academic seal. The other of an academic crest.

The committee preferred the crest to the seal and also requested that we incorporate the pine tree with the four branches that is used in the Pinewood Presbyterian Church in America logo.

The biggest problem was that the paintbrush styling of the church logo does not play nicely with a refined academic style logo. After lots of experimentation we were able to integrate four pine branches into the crest in a subtle, yet meaningful way. But there was still a long way to go. You can see four different variations that were provided to the committee during the process.

After choosing version A, there was still a long refinement process that included changing the open book to a stack of books. In the end we were able to create a new seal for Pinewood Christian Academy that lives up to the excellent education they provide. We also worked carefully to create a variety of versions and variations that could be used in many different ways.